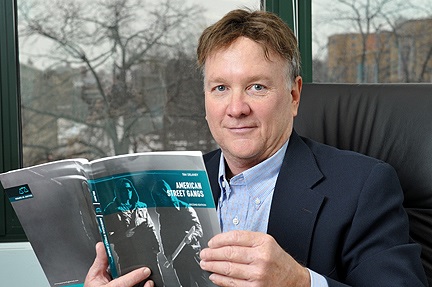 Author’s update of ‘Gangs’ details growing criminal enterprises
In the seven years since SUNY Oswego sociologist Tim Delaney wrote “American Street Gangs,” membership in gangs has soared, many have moved into white-collar crime, and deadly transnational gangs have expanded their trafficking in drugs and humans.
Tim Delaney with bookNow comes the book’s second edition, a paperback from Prentice Hall that the publisher hopes will elevate Delaney’s work from the second or third best seller in the genre to first.
“This is almost a completely different book from the first edition, though most of the chapter titles are the same,” said Delaney, author of more than a dozen sociological books on subjects from sports to popular culture. “I discuss more gangs than ever before, more cities with gang problems and the data is as up to date as it can be.”
Delaney notes that what middle-class Americans often shrug off as a problem isolated to particular urban neighborhoods impacts the whole nation. There are 1.4 million Americans in gangs in cities, outlaw motorcycle groups, prisons and more. It is a cross-cultural, increasingly cross-borders problem with deepening ties to popular culture, now taking root outside cities, he said.
“We’ve long had the urban gangs—the Bloods, Crips, Gangster Disciples, Latin Kings,” Delaney said. “But there are more suburban gangs than ever before. There’s a dramatic increase in the number of rural gangs, where rural law enforcement agencies are now reporting gang problems. It’s still small compared to urban areas, but it’s growing.”
Delaney said he understands the primary audiences for his book will be in college classrooms in sociology, psychology, public justice and other disciplines. But he believes casual readers would find it fascinating—and alarming.
“Gang members are not just committing street crimes anymore,” Delaney said. “They are committing white-collar crimes. They are getting involved in identity theft, forging documents for illegal immigrants—and here’s a shocking reality—the transnational gangs, especially, are now involved in human trafficking. They bring women into the country and sell them as prostitutes.”
Into the streets
Delaney interviewed a wide range of sources for the new edition of “American Street Gangs,” from prosecutors and law enforcement personnel in Syracuse, Rochester and Buffalo to rehabilitation counselors in Los Angeles.
“When I was on sabbatical from SUNY Oswego, I spent a lot of time last summer and at the beginning of the semester on the streets of South LA,” he said. “I spent time on Skid Row talking with people who deal with addicts and rehab, trying to get people off the streets.”
Things have changed significantly since Delaney taught at Canisius College and spent Friday and Saturday nights following a Crips gang around Buffalo. With the advent of highly organized and often lethal gangs such as MS-13 and the 18th Street Gang, law enforcement has had to respond.
Delaney acknowledges that use of the federal Racketeer Influenced and Corrupt Organizations act “has been very successful in incarcerating street gang members. Syracuse alone has had seven gangs effectively put away because of RICO. For a city that size, it’s unheard of.”
But he said that is the only good news. “We still haven’t addressed why they became a member of a gang in the first place, so everybody you put away is replaced on the streets,” Delaney said. “And then you put these hardened gang members into prison, and that’s why prison gangs are expanding, and unless you put them away for life, they’re coming back out into the neighborhoods.” Delaney said about two out of every three gang members who are sent to prison get arrested again after release.
Socioeconomic factors are the main driver, from the economy itself to single-parent families, he said. Diversionary programs cost money, but money is tight. “Gang members are often looking for a substitute family. Most young people won’t admit they need structure, but they do,” Delaney said. “They need to know where the boundaries are. They need to know there’s somebody there.
“This is what’s so fascinating, because when they join the gang, they get the structure. Yet once in the gang, they are often treated as poorly as if they were in an abusive family. If you do something wrong, you get punished. The gang life is very, very violent, and it starts with the beat-in, the initiation, the most common way to get into the gang.”
Popular culture, he said, also feeds into fascination with gangs: rap lyrics, coded symbols in graffiti and tattoos, television shows, movies and more.
“The book is written in such a way that most anybody can understand it,” Delaney said. “One other thing that’s new in this book: In each chapter I’ve added boxes connecting street gangs to pop culture.”
PHOTO CAPTION: Gangs revisited—SUNY Oswego sociology chair Tim Delaney has updated his 2005 book “American Street Gangs,” finding they are more numerous, conducting a wider range of criminal enterprises—and deadlier. (Posted: Feb 28, 2013)
http://www.oswego.edu/news/index.php/site/news_story/updating_gangs