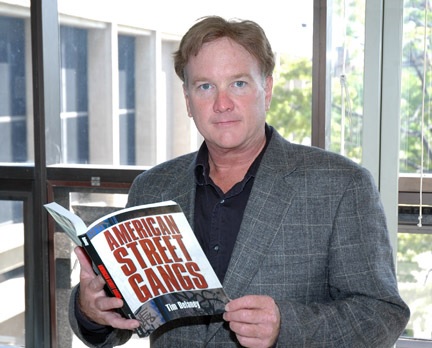 Professor publishes book on street gangs
As long as newspaper headlines continue to tell of gang-related violence, the new book by Dr. Tim Delaney of SUNY Oswego’s sociology department will remain topical.
“American Street Gangs” draws on Delaney’s firsthand encounters and interviews with gang members as well as his academic work. He said it is the first book to explore gang activity in Upstate New York.
“I focus on theoretical and socioeconomic reasons why there are gangs, why people turn to gangs and how we could get people out of gangs,” Delaney said.
Professor John Anderson of Cal State-Fullerton has called the text groundbreaking, adding: “There is no other book that I know of that provides such a comprehensive exposition of gang dynamics and activities.”
Delaney first encountered gangs from a business perspective, working as a field supervisor with convenience stores in and around Los Angeles. “In our stores we had to deal with gangs on a regular basis,” he recalled. He also had an opportunity to do a citizen ride-along with the Los Angeles Police Department to learn the law enforcement perspective.
When he started graduate work in California, Delaney gained an academic perspective from experts that included Professor John Quicker, the first person to write a book on female gangs.
While teaching at Canisius College, Delaney met one student who was a former gang member who later became a counselor trying to steer kids out of gangs. The student offered to bring some gang members in to meet the students, and through those contacts Delaney was able to interview many gang members around Buffalo.
“I’m not saying I support what they do, but it was very important to learn why they do what they do, to take readers and students into their point of view to better understand the conditions that lead youth into gangs,” Delaney explained.
The book also details street gang activity in Syracuse and Rochester. “You can find a lot of texts that study gangs in New York City,” Delaney noted. “This is the first one I know of that looks at gangs in Upstate New York cities.”
While economic issues and peer pressure are key factors in gang recruiting, some members join to gain a feeling of power or just fulfill a need for thrills. “Unfortunately, many people just find it exciting,” he said. “It gives them an endorphin rush, a jolt of machismo.”
He had research help from Rebecca Jerrett, then a master’s psychology student at SUNY Oswego, notably in her designing graffiti illustrations of gang identifiers.
Delaney believes the text will prove useful in psychology, sociology and criminal justice courses. It also will appeal to a general audience looking for a comprehensive book on gangs, he said.
Published by Prentice Hall, “American Street Gangs” retails for $53.33.
– END – (Posted: Sep 07, 2005)