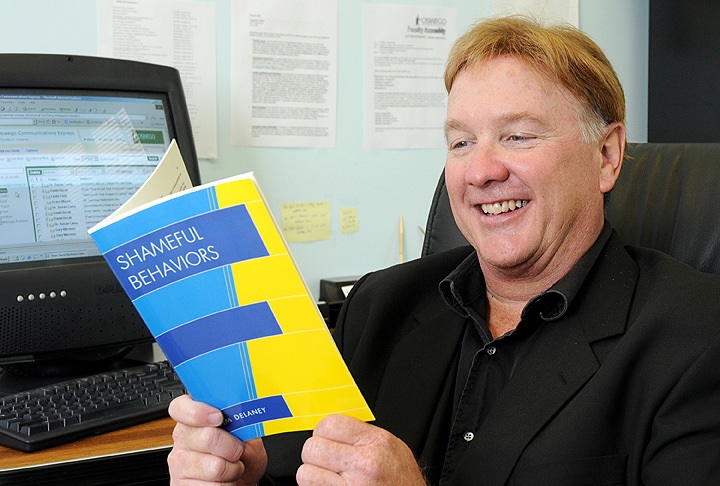 Professor’s book asks: Have we no shame?
Tim Delaney of SUNY Oswego’s sociology department asks whether shamelessness is running amok in society, and the reasons why, in his new book “Shameful Behaviors.”
“The book is meant to be interesting and entertaining, but it’s also designed to get people talking about the culture that we live in,” Delaney said. “What some people consider shameful, others may not. That’s why we can have this culture of growing shamelessness and also this countermovement saying, ‘you should be ashamed.’”
He recalls reading a newspaper article about “drunk shamings, when somebody drinks too much and passes out, and friends draw on them, place things on them, and take pictures to shame the person,” Delaney said. While it’s nothing new, the behavior that used to be hidden now shows up on the Internet—sometimes put there by the victim, he said.
The more research he did speaking to students and others, the more he realized there was enough for a whole book on the culture of increasing shamelessness, how it is influenced by technology and the Internet, and reactive forces trying to enforce shame.
In early Puritanical America, wrongdoers were shamed by being placed in the town stocks or, for adulterers, branded with the scarlet A. In modern America, public shame is sometimes the ticket to fame. “American Idol” reject William Hung, for example, parlayed a bad performance of Ricky Martin’s “She Bangs” into a record deal and countless TV appearances.
Published by the University Press of America, “Shameful Behaviors” includes the history of shamings and stigmatization, the continued existence of formal shaming ceremonies like military court-martials, and informal shamings where people jokingly slam friends.
“Because this is about the growing culture of shamelessness, it includes a lot of sociology, but because it also concerns self-esteem, there is a lot of social psychology, too,” Delaney said.
Delaney’s research included surveying Oswego students on some behaviors, identifying subjects as “perpetrators,” “victims” and “self-shamers,” the latter those who publicize their own humiliation.
“I found that people with high self-esteem really don’t care, but people with low self-esteem saw [self-shaming] as a way of showing they belong, that they go to parties and have friends,” he said.
“As a professor, I try to warn students that anything out in cyberspace can be accessed by anyone,” Delaney said. “Future employers routinely Google their applicants, so this could come back to haunt them. I tell students to ask themselves two things: ‘Would I want future employees to see this? Would I want my kids to see this?’ If not, then don’t post it.”
Whether it’s Paris Hilton, Hung or teenagers who willingly show off for “Girls Gone Wild,” part of the appeal is the quest for what Andy Warhol first termed one’s 15 minutes of fame, Delaney noted.
But the increasing perception of cultural shamelessness also brings a backlash movement of people trying to censor or crack down on these behaviors, he noted, as “there are still a lot of social institutions and people trying to force shame onto others.” – END – CONTACT: Dr. Tim Delaney, 312-3410, tdelaney@oswego.edu
(Posted: Sep 17, 2008)