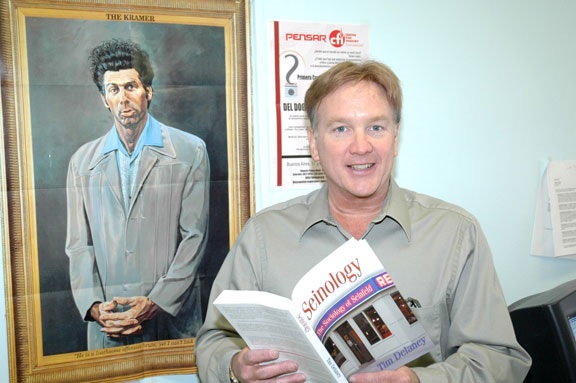 Professor’s text teaches sociology through ‘Seinfeld’
Delaney with bookA new text by an Oswego professor teaches sociology using one of the most popular TV shows ever and one of the college’s most famous students.
Tim Delaney of the sociology department thinks his new book “Seinology,” which teaches basic sociology using episodes of “Seinfeld” as examples, will connect with both students and a general audience.
“It’s designed to be a reader for introductory sociology, popular culture or communication courses,” he said. “But on the other hand, it’s also written for the trade press, for the world of popular culture.”
The project sprang from Delaney finding that telling stories from the hit show helped students connect with different sociology topics.
“Over the years, I’ve used references to ‘Seinfeld’ episodes in the classroom, and I’ve noticed students have a positive reaction,” he said. “I know that they got the concepts, and I found that I could use the episodes in ways that were appropriate and made the topic relevant.”
When Delaney decided to write the book, he would go home after teaching and ended up watching all 180 episodes of the cultural phenomenon that starred Jerry Seinfeld, who once attended SUNY Oswego. “I treated the project as if it was a night class, and the show was my professor,” Delaney said.
Delaney realized that each episode dealt with two to three subjects and organized his notes by how they tied in with traditional parts of an introductory sociology text.
“When I was writing a particular chapter, I pulled out the notes from particular episodes,” Delaney explained.
Each chapter tackles a sociological subject and uses a catch phrase from the show as a subhead. For instance, Chapter 2, “Cultural Norms and Etiquette,” is subtitled “Good Manners Are the Glue of Society—Kramer,” while Chapter 6, “Sex and Gender Issues,” is subheaded “Not That There Is Anything Wrong With That—Jerry.”
Delaney is looking into creating a course titled “Sociology and ‘Seinfeld’” that would use the book as its main text and provide an accessible entry into the field for students who may have never considered learning about sociology.
“Anyone who is a fan of ‘Seinfeld’ should like the book,” Delaney said. “In addition, I think it’s set up so that even if you have no background in ‘Seinfeld,’ it’s something you can follow. In a way, it’s like a novel, where we introduce the characters and people can follow the action. The reader will learn about sociology without being overwhelmed by it.”
While the book’s unconventional nature meant it took about two years to become published, Delaney said his long-running faith in the project was confirmed when he learned there were around 6,000 pre-orders before any major publicity had begun. That DVDs collecting different seasons of “Seinfeld” continue to sell well points to the show’s enduring popularity, he added. “I always anticipated the book could sell,” Delaney noted. Published by Prometheus Books, “Seinology” retails for $19.
– END – PHOTO CAPTION: Seinology now!—In his new book “Seinology,” Tim Delaney of SUNY Oswego’s sociology department mines examples from former Oswego student Jerry Seinfeld’s landmark comedy to teach basic sociology lessons. (Posted: Mar 08, 2006)